by Gamerz.ma
in Reviews
0
20
VIEWS
ShareTweetSendSend

God of War Ragnarok reviews are challenging to write, but not for the reasons you might expect. I wish I could say that I had to be careful not to spoil the tale because it has so many unexpected twists and turns that doing so would make the experience less enjoyable, but that isn’t actually the case. The major plot twists in God of War Ragnarok, which I am unable to openly discuss, are all connected to the gameplay. It would actually be less spoilery to reveal what happens to Character A at a crucial juncture than to reveal what you’re doing with the controller at that time. Compared to its predecessor, Ragnarok is substantially bigger and offers a lot more variety, but at the expense of a coherent and well-paced narrative. Many people will find that to be a fair trade-off, but because of the compelling storyline and high stakes of God of War from 2018, I had higher hopes for Ragnarok.

The final scene of God of War (2018) is a momentous revelation that reframes Kratos and Atreus’ whole journey. When the two finally arrive in Jotunheim to bury Faye’s ashes, they learn that she was actually one of the last giants and that Atreus is actually Loki, a Jotunn champion prophesied to lead an army against Asgard and defeat Odin in Ragnarok, while Kratos is doomed to die protecting his son – though Atreus is unaware of it. Baldur’s death has set the prophecy into motion, and when we join up with them at the beginning of God of War Ragnarok, Midgard has already been devastated by the three-year winter that precedes Ragnarok, turning it into a frigid, inhospitable wasteland. 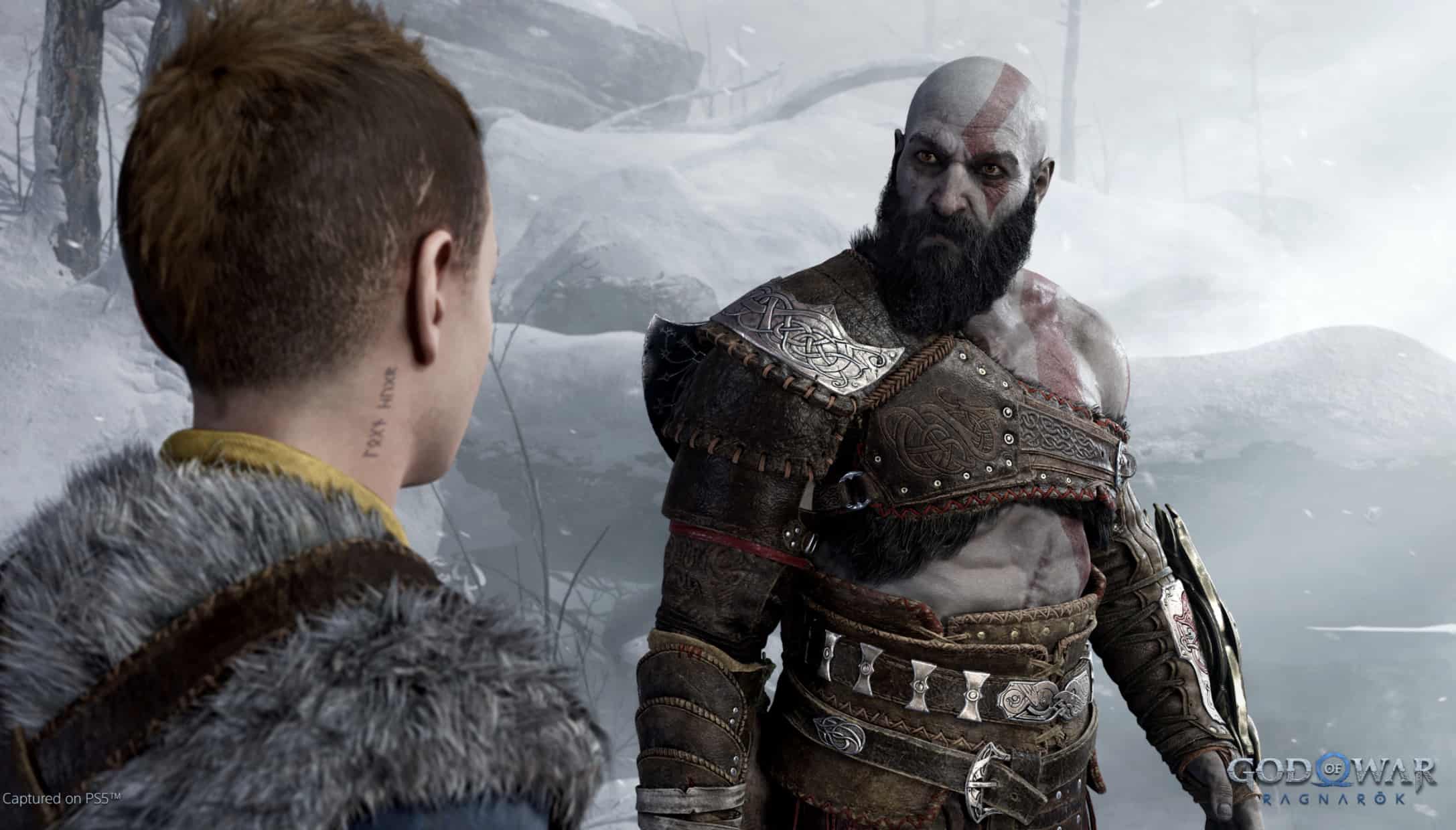 As he nears the end of his adolescence, Atreus’ Jotunn magic is beginning to grow, and he is anxious to discover more about the past of his people and his true identity. He senses a conflicting tug between Loki the Champion and Atreus, Kratos’s son. Kratos grudgingly decides to accompany Atreus on his quest to discover who he is even though his only motivation is to protect his son and keep him from choosing the same route he did, the path of violence.

With all of the side trips along the way, that adventure leads Kratos and Atreus on a sweeping tour of the nine realms, stopping at both new and well-known places for significant and occasionally baffling reasons. The lava-spewing molten core of Muspelheim to the seashore dwarven settlements of Svartalfheim each have their own distinct visual character, much as they did before, but now they are even more expansive and detailed. These surroundings’ often spectacular art direction shows that the unquestionably large budget was well used. In order to appreciate the effort that went into creating these locations and giving them a realistic feel, I felt bad if I didn’t take the time to stop and rotate the camera about in every new region. Ragnarok’s breathtaking landscapes and action sequences are only rivaled by Uncharted 4, and if it ever makes it to PC with ultrawide support, I’ll happily spend a few dozen more hours playing it simply to take it all in once again. 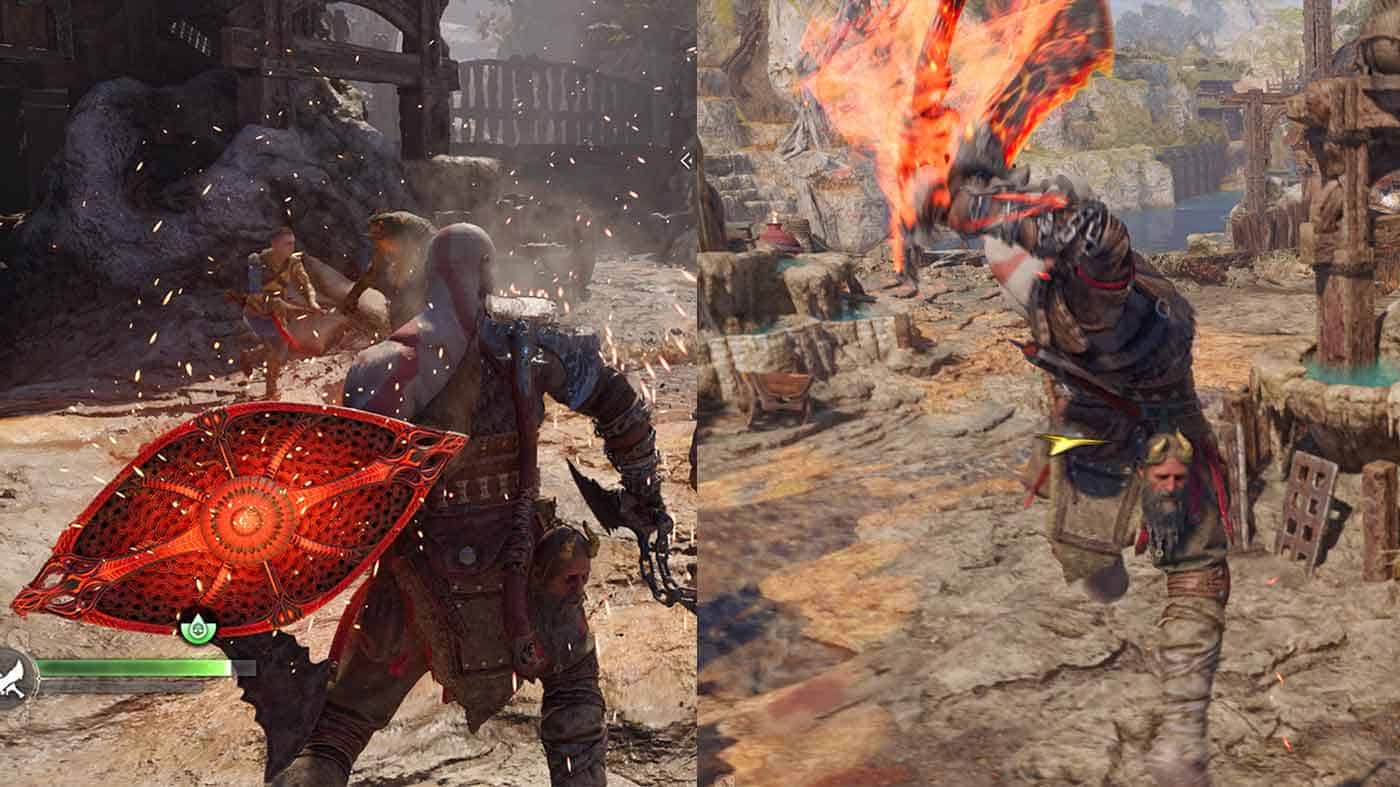 It’s impossible for me to overstate how much there is to see. God of War Ragnarok has an open-zone region full of side quests in nearly every world, in contrast to God of War 2018, which had one primary exploration hub in Midgard with multiple linear realms/optional arenas. Each realm offers you the chance to stay a while and explore once you’ve completed the linear story portion of it. If you have earned the required powers and upgrades to even access anything, these optional locations, like the Lake of Nines, are so large they require a boat or some other type of transportation to explore and can take anywhere between two and six hours to completely clear. It is possible to complete the plot without ever seeing the optional territory that is as large as all of the other realms, even though it is accessible through sidequest near the game’s conclusion. I’ve seen estimates that say Ragnarok can be finished in 70 hours, but that seems low to me. I’ve put in 60 hours so far, yet I’m just halfway done.

It is an amazing accomplishment for Ragnarok to have an open-world amount of content with a linear game’s level of polish, but it also borders on triple-A bloat. There are five lonely spirits who require you to find their lost tube sock for them for every journey that results in emotionally stirring moments and catharsis for cherished characters. When so many of the locations seem to have been created with gameplay and time consumption in mind solely, and a writer had to step in later to come up with a narrative justification for why you’re supposed to be there, it’s difficult to feel invested in every tiny story. 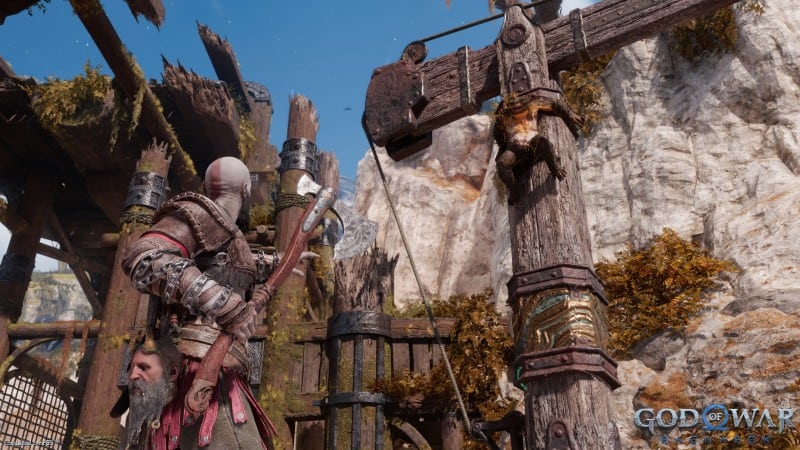 This makes complete sense for side quests, but the primary plot shares the same flaw. It seems as though the designers chose where you would travel and what you would do there before going back and creating a loosely connected story to tie everything together. Ragnarok’s impending menace doesn’t have nearly the impact on our heroes’ decisions as you might anticipate, and the game’s immensity and your companions’ continual reminders that you may take your time and explore if you wish prevent you from ever feeling any real sense of urgency. As Kratos drifts from one incident to the next, responding to each one while essentially serving as the passenger in his own journey, each chapters feel episodic and disjointed from one another. This time, there are no great twists that tie everything together, and while there are some touching scenes and thoughtful topics, there is simply too much wandering before a clear-cut resolution.

In terms of playability, Ragnarok delivered more than I had hoped. It succeeds in introducing new ideas and gameplay elements constantly from beginning to end, keeping combat and exploration exciting and fresh throughout. Gear has the same progression issues as God of War in 2018, but you can now genuinely create intricate builds with awesome synergy that have a noticeable impact. In comparison to the last game, there is an astonishing amount of variation in the locations you visit and the adversaries you face, and your fighting options are also far more complex and significant. Ragnarok is a fantastic sequel thanks to these tweaks and improvements, and its longer running time will please those who believe that time invested equals value. However, the route leading from Faye’s final resting place to Ragnarok’s decisive battle is not nearly as well-planned or worthwhile as it could have been.

God of War Ragnarok is an excellent game. The story is very competent, they improved the narrative - that was the most flawed part of the other, in my opinion - and managed to bring the spirit of the previous games to the surface without losing the essence of the new face of the franchise.